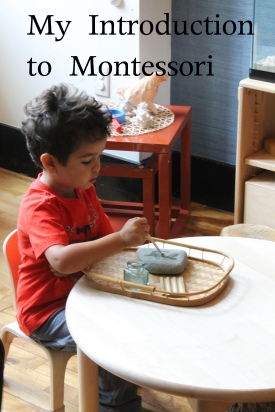 As you may have noticed from my many previous references to “Montessori,” my husband and I are big believers in the Montessori philosophy of education and parenting. The approach, developed over a hundred years ago by Dr. Maria Montessori, is a child-centered educational philosophy that emphasizes a high level of respect for each child, and allows children in a properly prepared environment to develop at their own pace.

Montessori believes that children are naturally good, naturally peaceful, and naturally motivated to learn. It doesn’t see children as blank slates to be filled up with knowledge by teachers, but rather sees them as little people in the process of constructing themselves. The teacher’s role in a Montessori classroom, is to prepare the environment and remove the obstacles for that important job of self-construction.
Montessori classrooms are characterized by freedom within limits. Children have the freedom to choose their work, and to work on it for as long as they wish. They also have the freedom to work alone or in groups. But they do not have the freedom to make the classroom unsuitable for the concentration of others, by yelling or running, or by joining somebody else’s work without asking. When they start to hit those limits, the teachers respectfully give them reminders. The consequence is an amazingly peaceful, serene environment where children are all engaged in what they’re doing, and respectful of one another.

Dr. Montessori’s ideas really started to gain traction when she successfully taught sixty, thought to be “unteachable,” children in the slums of Rome using her methods. Since that time, the Montessori approach has been widely credited for producing especially enthusiastic learners and creative thinkers, and counts a disproportionate amount of successful entrepreneurs among its alumni (including both google founders, the founder of amazon and Julia Child).

While my husband did spend a couple years in Montessori school early on, our obsession with it came about almost randomly. We were looking for activities to do with our 10 month old when we first moved to Boston. We discovered the Montessori Parent Child Center in the South End. While we expected our son would an engaging experience through the once a week parent-child classes, we were shocked to find that they were life-altering for us as well. We felt that through these classes, we learned how to be better parents.

After my son grew out of the amazing parent child classes, my husband decided to start his own Montessori school for our son. It combined an authentic Montessori environment with more parental involvement than the traditional Montessori school. The school has been open for one year now, and it’s been incredible. Always a sensitive and cautious soul, my son has blossomed into a confident and social four year-old. I’m so grateful to the Montessorians who have helped to provide him (and us) with an environment where he could thrive.

I wanted to give this brief introduction to Montessori, as well as tell you why I’m such a big believer. It will also give context to some of my future posts that will explore more in depth some of the transformative things I’ve learned from the method.

As a rule, I believe that any philosophy is only as good as it’s execution. But if you are looking for an environment for your child that sounds like what I describe above, and you have Montessori in your area, I really recommend you check it out.

Yep, that’s my 3-year-old digging in to a plate full of octopus tentacles.

I love food.  Some might say that I like it (and think about it) too much. One of my first memories is sitting at a raw bar at age 3 and my parents giving me an oyster. The people sitting next to me clapped as I slurped it down, and I felt so proud.

So I asked my parents recently what they did to encourage me to eat everything (especially since I learned later in life that my mom is actually quite picky). Here is what they said:

This is what my parents did (and what I’m trying to do with variable success with my own child). What do you do to encourage your kids to be good eaters?

Here is Mamajamas Member Jake Munz’s adorable baby boy rocking a little Mamajamas onesie (check out his Mamajamas list here). His front is kind of scrunched in the picture but it says “I will grow out of this quickly” which I found to be oh so true with my son’s baby clothes… 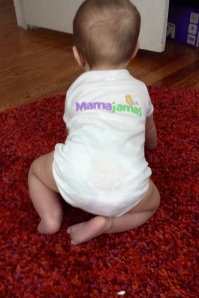 And here’s a picture of my two adorable nephews in their little Mamajamas onesies (and I encourage you to check out my brother’s pretty hilarious Mamajamas list here).

By the way, I’ve loving the Mamajamas dads representing here! And aren’t their kids the cutest things?

Letting kids be kids. I thought this was an nice post.

I see too many of my friends stress out about what their toddler knows or doesn’t know.

Sometimes, I find myself stressing out too.

But then I reminded myself it’s not a race. Dario will have many years of school which will likely (and perhaps unfortunately) include many years of memorizing and writing (or typing) facts and figures.

For now, I just want him to learn to be a good, kind little person, and get to enjoy childhood!

Start Your Baby Registry at mamajamas.com